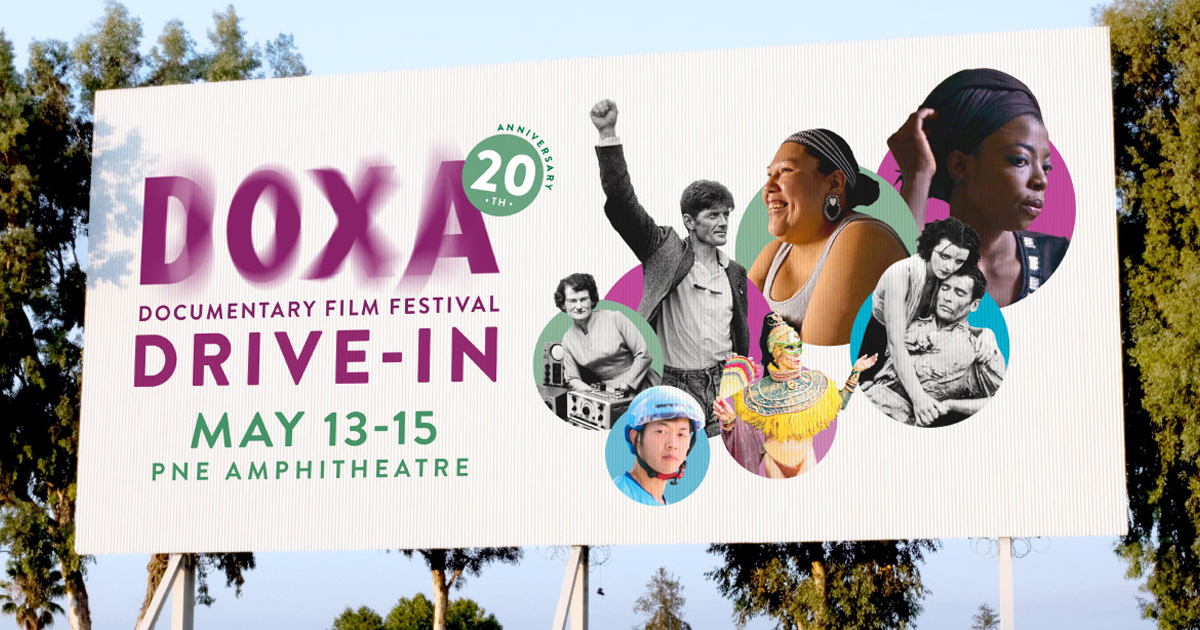 After a year of laptop screens, televisions and iPads, DOXA is thrilled to invite moviegoers back to the big screen—from the comfort of their car! The DOXA Drive-In is DOXA’s most exciting innovation for 2021, and a chance for you and the members of your bubble to see a few of this year’s standout films in a venue where documentaries rarely make it onto the bill.

Taking place over three nights from May 13 to 15, the DOXA Drive-In will host seven individual screenings for its automotive audiences at the PNE Amphitheatre, including a number of new documentaries by up-and-coming Vancouver filmmakers that represent some of DOXA 2021’s best.

Of particular note is Shannon Walsh’s The Gig is Up, one of the highlights of this year’s festival, which offers a glimpse into the rapidly expanding gig economy and the workers around the world whose livelihoods have become precarious under a culture of convenience. Another locally produced film, Brishkay Ahmed’s In the Rumbling Belly of Motherland, chronicles the saga of Zan TV, a female-operated and -oriented news agency in Kabul, Afghanistan. Ahmed’s film receives its world premiere at this year’s festival.

A major entry in this year’s Justice Forum, Vancouver-based director Elle-Máijá Tailfeathers’s Kímmapiiyipitssini: The Meaning of Empathy is an urgent look at the substance-use crisis and drug-poisoning epidemic unfolding on the Kainai First Nation in Alberta, while Sheona McDonald’s Dead Man’s Switch: a crypto mystery is an engrossing tale of death and the search for millions in missing crypto-currency that refutes the old adage “you can’t take it with you.”

For households with younger members, a special matinee presentation of Someone Like Me (featured as part of DOXA’s Rated Y for Youth program) will take place on the afternoon of Saturday, May 15. Sean Horlor and Steve J. Adams’s film tells the story of Drake, a 22-year-old gay man from Uganda, as he resettles in Vancouver and builds a support network with other LGBTQ+ asylum claimants.

Also screening at the inaugural DOXA Drive-In are two essential music docs currently making waves on the international festival circuit. FANNY: The Right to Rock, Bobbi Jo Hart’s greatly anticipated rock doc about the first all-female, with Asian American and LGBTQ+ members, to release albums on a major label. Poly Styrene: I Am a Cliché is a look at the life of X-Ray Spex frontwoman Poly Styrene, whose complicated legacy as a pioneering Black woman in punk music is examined by her daughter, Celeste Bell, who directs the film in the company of Paul Sng.

Screenings will go ahead rain or shine, with tickets priced at $50 per carload, per film, and a limit of six passengers to a car. Guests are asked not to leave their vehicle during screenings except for restroom access, and strict COVID-19 health and safety protocols will be in place throughout the event to ensure the safety of attendees and staff.

Committed to cultivating curiosity and critical thought, DOXA 2021 delivers some of the very best in contemporary documentary cinema over 11 days. DOXA Documentary Film Festival runs May 6-16, 2021, offering an exceptional selection of films, filmmaker Q&A’s and live streaming events. Films will be available to stream for the duration of the above festival dates. Films are geo-blocked to Canada and virtual tickets will be limited. Select screenings will include live and pre-recorded filmmaker Q&As and extended discussions. Festival passes are now available online at www.doxafestival.ca. For further information, call DOXA at 604.646.3200.