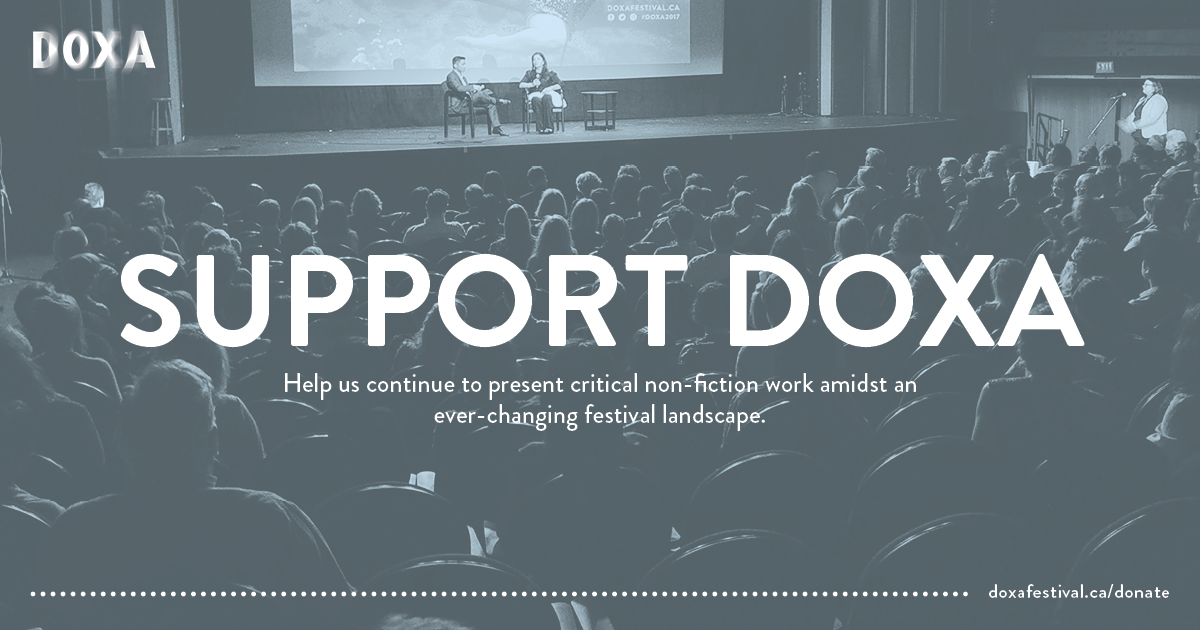 DOXA is committed to cultivating curiosity and fostering a local and international community of documentary cinema lovers.

We bring together audiences, filmmakers, and diverse cultural communities through the presentation of outstanding documentary work from around the globe. Through screenings, panel discussions, workshops and educational initiatives, DOXA facilitates a cinema culture that is curious, inventive and bold. The festival was established in 2000 by the Documentary Media Society, and our mission then, as it is now, is to support a better understanding of the complexity of our times through engaging the public in documentary media as an art form.

DOXA is looking forward to the future. We're immensely proud of 2022's hybrid festival offerings, and are grateful to the filmmakers, partners, volunteers and audience members whose support has allowed us to present outstanding documentary cinema in this new, multitudinous way. Your contribution to DOXA will help us face adversity head on, as we continue to present genre-bending and critical nonfiction work amidst an ever-changing festival landscape.

We are also continuing with the Holdstock Fund for Documentary Engagement. With the generous support of Roger Holdstock, this fund helps DOXA bring filmmakers and special guests from across Canada and around the globe to the festival. The fund helps us to engage our audience, not only through the presentation of ground-breaking documentaries but also through the provision of stimulating discussions and interactions following screenings. This year, we are proud to host visiting filmmakers for the first time since 2019.

"In a culture that views movies as largely a form of escapism, documentary has sometimes had a tough time, but we seem to be entering into a period where audiences are more receptive to films that document the world we live in. I have found that the level of engagement increases greatly when filmmakers and artists are present at screenings of their work. Audience members can learn about the challenges of production, the motivations in making the films, and interact with the real people behind the film. I initiated the Holdstock Fund for Documentary Engagement to ensure that the experience of seeing a film with its creator(s) occurs more often. The intent of the fund is to facilitate the presence of more filmmakers and artists at DOXA screenings. I urge you to contribute and help us all to be more engaged." - Roger Holdstock

Making space for social change, fostering community, and championing the power of documentary cinema are at the core of what we do—and we couldn’t do this work without your support.

DOXA MUG  •  $25
White in colour, with black text and camcorder design, in a unique geometric shape.

THE COMPLETE DOXA PACKAGE  •  $60
Everything listed above!

To claim your exclusive festival merchandise, please click on the button below:

Feel free to reach out if you have any questions. All inquiries can be directed to Director of Development & Communications, Sarah Bakke at sarah[at]doxafestival.ca. Available in CANADA ONLY. Please note that receiving merch exempts you from a valid tax receipt. While quantities last.

THANK YOU TO OUR DONORS

These have been extraordinarily challenging years for DOXA, as well as many other arts organizations. We understand that these are precarious financial circumstances for many in our community; any donation made to DOXA during this time is especially meaningful. Donations of $20.00 or more receive a tax receipt.

DOXA is honoured and grateful for every donation received throughout the year, whether it be a few dollars or thousands. We thank each and every donor for supporting our efforts in presenting the best in documentary. Through individual donations, DOXA will continue to build a film culture that informs, inspires, and educates. See a list of our donors here.

For our 20th Anniversary in 2021, we held a donation drive to raise $20,000. These fundraising efforts brought in just over $19,000! We are so immensely thankful to all who donated. With this campaign, our ultimate goal was to continue presenting independent and innovative documentaries to Vancouver audiences, while also enabling the growth of documentary cinema as an art and a craft—through the mentorship of emerging documentary filmmakers.

The Kris Anderson Youth Connexions Forum was an exciting part of DOXA's programming from 2006 to 2013, designed to foster documentary filmmaking and storytelling skills in emerging filmmakers who faced barriers in attaining their career goals. With the support of this fundraising campaign, we intend to carry forward her original spirit and intent for the program, while continuing its evolution in meeting the matters of the day. Investing in the early development of emerging filmmakers is critical to creating the equitable, diverse documentary landscape of the future.

Next steps: crafting the program itself! Opportunities for feedback/insight will be extended to our larger doc community in the coming months. Updates on this process will likely come through our newsletter. Sign up here!