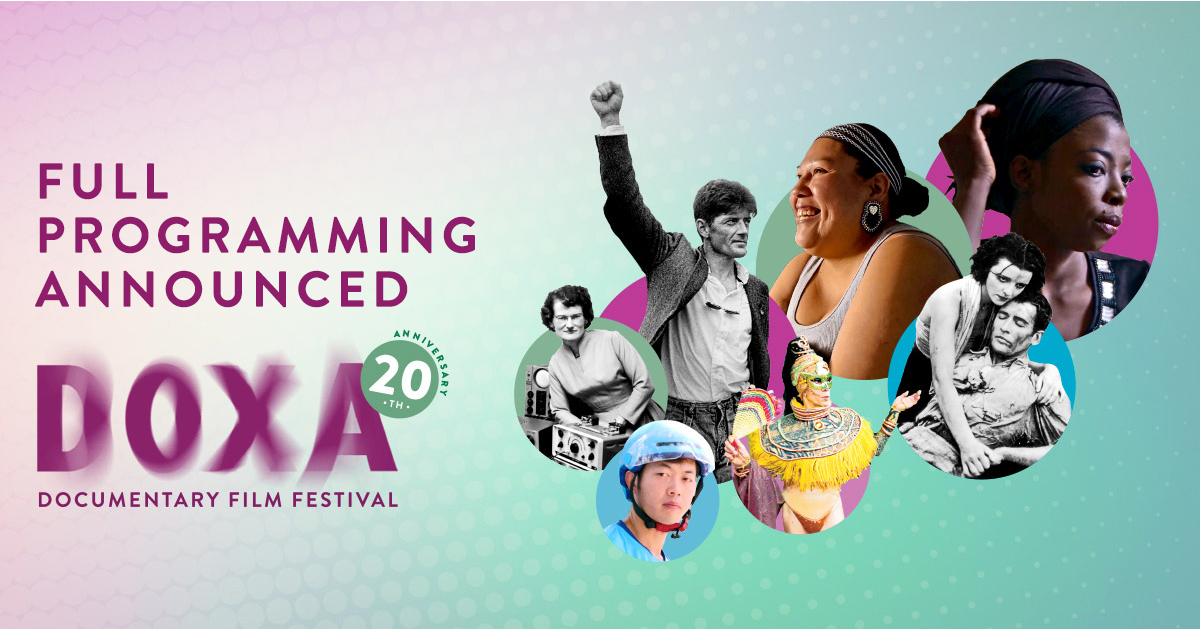 Twenty years after it began screening some of the world’s most crucial and thought-provoking documentaries for Vancouver filmgoers, DOXA Documentary Film Festival is back to celebrate its platinum anniversary in a way audiences could never have imagined two decades ago—streaming directly into their homes. That’s right, for the second year in a row DOXA will be making its entire program available online, including 49 features, dozens of shorts, and a handful of live Q&As and Industry events, all accessible via DOXA’s website. The social distancing continues, but from May 6 through 16, 2021, the outside world is coming to you.

For our 20th anniversary, this year’s DOXA will be available Canada-wide, and will feature a special celebration of the festival’s history, with three generations of program directors—Kris Anderson (1998–2010), Dorothy Woodend (2010–2017) and Selina Crammond (2018–Present)—highlighting some of their favourite features from DOXA’s past, including works by Sara Roque (Six Miles Deep), Claire Simon (Mimi) and Chris Marker (The Owl’s Legacy), among others.

Three other curated programs highlight the important documentary films that are capturing and defining communities across Canada and around the world. As the death toll of Vancouver’s opioid crisis climbs higher each year, a timely program of films curated by VANDU (Vancouver Area Network of Drug Users) considers policies that have benefitted drug users, as well as the devastating effects of the global war on drugs, including groundbreaking films from the Philippines (Alyx Ayn Arumpac’s Aswang), New York (Mia Donovan’s Dope is Death) and a seminal doc from Vancouver’s Downtown Eastside (Nettie Wild’s FIX).

The FRENCH FRENCH series returns this year, with exciting new films from a few of the French documentary auteurs (Marie Dumora, Claire Simon and Alain Cavalier) who have shaped past iterations of this popular DOXA program. Additionally, DOXA is proud to present a bold showcase of experimental docs by Indigenous filmmakers curated by the Cousin Collective that questions some of the most central tenets of documentary filmmaking itself.

A number of music documentaries also make their mark, including Lisa Rovner’s Sisters with Transistors, which reveals the overlooked history of women in electronic music, and FANNY: The Right to Rock by Bobbi Jo Hart, a testament to 1970s Filipina-American LGBTQ+ rock group Fanny who many remember as one of the great lost rock and roll bands. Celebrating the rich history of Congolese Rumba, DOXA is proud to host the world premiere of Alan Brain’s The Rumba Kings, and Paul Sng and Celeste Bell’s Poly Styrene: I Am A Cliché closes out DOXA 2021 with a look at the life of the first mainstream Black woman in British punk rock, and the complicated legacy that she left behind.

One of the festival’s most high profile titles this year is Summer of Soul (…Or, When the Revolution Could Not Be Televised), the directorial debut of Ahmir “Questlove” Thompson, whose documentary on the Harlem Cultural Festival—which took place during the same summer as Woodstock 1969 and attracted a crowd of 300,000—recently won acclaim at the 2021 Sundance Film Festival, walking away with both the Grand Jury Prize and the Audience Award.

Several Canadian filmmakers launch their world premiere at DOXA. In the wake of recent news stories announcing the targeted assassination of female media workers in Afghanistan, Vancouver-based filmmaker Brishkay Ahmed’s In the Rumbling Belly of Motherland provides a sharp look into Zan TV, Kabul’s female-operated and -oriented news agency in Afghanistan. From Indigenous-owned organic farms to Arctic geodesic domes, Caroline Cox’s Food for the Rest of Us explores farming and harvesting as forms of radical activism. Relationships late in life take centre stage in Love, the Last Chapter directed by Dominique Keller as she follows three couples inside a seniors’ facility. These films and more are in competition for the Colin Low Award for Best Canadian Director, which this year is sponsored by the Directors Guild of Canada (DGC).

Announced last week, DOXA’s Special Presentations include Shannon Walsh’s The Gig is Up, which takes a close look at gig labour, a growing phenomenon and employment path that promises flexible hours, independence and open recruitment to workers around the world. Kímmapiiyipitssini: The Meaning of Empathy, directed by Elle-Máijá Tailfeathers (The Body Remembers When the World Broke Open), puts humanity and compassion first in its engagement with the substance-use crisis and drug-poisoning epidemic on the Kainai First Nation in southern Alberta. Directed by local filmmakers Sean Horlor and Steve J. Adams, Someone Like Me, follows a group of strangers from Vancouver’s queer community who unite under the banner of Rainbow Refugee, a non-profit that connects LGBTQ+ asylum claimants with sponsors.

Committed to cultivating curiosity and critical thought, DOXA 2021 delivers some of the very best in contemporary documentary cinema over 11 days. DOXA Documentary Film Festival runs May 6-16, 2021, offering an exceptional selection of films, filmmaker Q&A’s and live streaming events. Films will be available to stream for the duration of the above festival dates. Films are geo-blocked to Canada and virtual tickets will be limited. Select screenings will include live and pre-recorded filmmaker Q&As and extended discussions. Festival passes are now available online at www.doxafestival.ca. For further information, call DOXA at 604.646.3200.