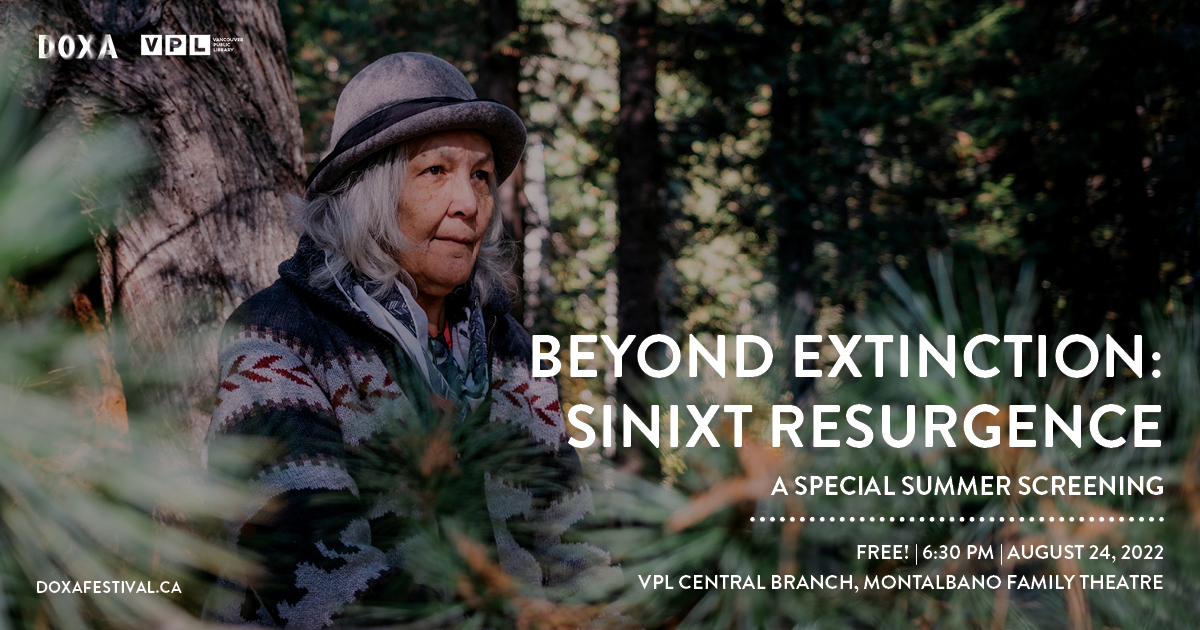 Surprise! We've added another screening to our summer roster — Ali Kazimi's Beyond Extinction: Sinixt Resurgence was a favourite at DOXA 2022, so we're bringing it back.

For director Ali Kazimi, Beyond Extinction has been in the making since 1995, when he was first welcomed onto Sinixt territory in the Arrow Lakes region of what's colonially called British Columbia. While he was initially at camp for only a few days—to film and perhaps get to know the elders there—he soon became invested in their fight, and would stay closely in touch for years to come. What struck him most was their unbelievable battle to regain recognition as a living people; the Canadian government had previously declared the Sinixt Nation extinct.

As Sinixt leaders and allies crafted arguments for the courts, wrestling with issues as vast as immigration, land claims, archeological preservation and treaty law, it became clear that traditional ways of being could not be expressed, or even understood, by a bureaucracy designed to atomize, categorize and pin down. The Canadian government was not equipped to rescind their official belief that the Sinixt Nation no longer existed, yet we are listening to their words of resistance and witnessing their connection to a land that has been stewarded by Sinixt ancestors since time immemorial. Beyond Extinction: Sinixt Resurgence tells the "ongoing story of a people who reject their colonial ghost status."

On Wednesday, August 24 you'll get the chance to watch this compelling local story in the Vancouver Public Library's Montalbano Family Theatre (located on level 8 of the VPL's Central Branch). The film will start at 6:30 PM sharp, and is free to attend. Seating is limited, so we recommend arriving early!

Presented in partnership with the Vancouver Public Library. This screening is hosted on the unceded (stolen) territories of the xʷməθkʷəy̓əm (Musqueam), Skwxwú7mesh (Squamish) and Sel̓íl̓witulh (Tsleil-Waututh) peoples.